Focus caught up with some of the cast ahead of opening night on Friday, May 3, to see what audiences can expect from this colourful musical.

A: The audience can expect a fun and vibrant show, filled with colour and lots of people of all ages all experiencing the same joy up on stage at the same time. This show is one not to miss.

A: Joseph plays a vital role in this musical; he is the favourite son of Jacob’s which doesn’t sit well with his 11 other brothers. Joseph is a humble but proud bloke and is a honest and likeable character.

A: I began my musical performing back with Blacktown City Community Theatre in 2010 playing young Peter Allen in The Boy from Oz. From there I have performed in many musicals and made my return to the newly named Blackout Theatre Company last year playing Cosmo in Singing in the Rain. I graduated from Newtown Performing Arts High School and continue to thrive on performing and doing what I love.

Q: How did you get into acting?

A: In 2010 my mum’s good friend contacted her and told her there was a musical going on (The Boy From Oz) that had a perfect role for myself. I had always loved dancing from a young age was successfully cast in a singing and dancing role that started my passion for musicals. · What kind of audience is this show tailored towards? This show is tailored to suit all ranges of audiences with a great soundtrack, vibrant colours and spectacle as well as a cast of amazing performer its one show not to miss. 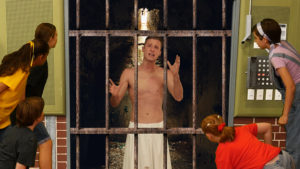 A: Audience can expect a fun, vibrant, quirky atmosphere with some catchy tunes and fantastic costumes. This show is fun for the whole family, the kids will enjoy the vibrant colours and the bouncy uptempo nature of the show and adults can enjoy the good natured humour as well as some classic Andrew Lloyd Webber showtunes.

A: I am but one half of the Narrator and these two women represent the storytellers, the ones that drive the story along and keep you informed. We’re fun, enthusiastic and get to sing some killer notes all the while keeping you engaged and present through the story.

A: I’ve been performing since high school and stepped into musical theatre through the then Blacktown City Community Theatre (now Blackout), went onto to do a performing arts degree and plan on performing my way into the grave like a true diva. 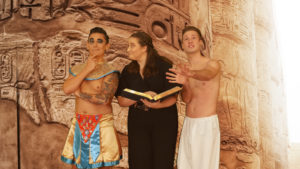 A: A lot of fun! Fabulous harmonies, fantastic choreography, and a really great story of triumph over adversity. We have some harmony lines that have been written just for this show so even if you’ve seen it before there will be some new things for you to experience. Stunning costumes made specifically for this production and a really fun innovative set.

A; I play one half of the narrators, we act separate from the story to tell the story and help to move the plot along.

A: I first started acting in primary school in a school musical but made the jump to community theatre after my high school drama teacher got me involved in a play she was involved with and from there i met people who I followed to the musical theatre circuit and I haven’t looked back since.

Q: How did you get into acting?

A: I’ve always been pretty dramatic so auditioning for the school musical as soon as I had the chance was an obvious choice.

Q: What kind of audience is this show tailored towards?

A: Everyone. There is no one style of music in this show, each scene and song have a new style so there is bound to be something in there for everyone. 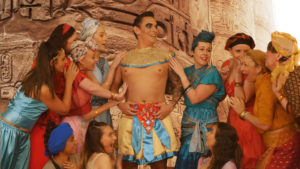 A: The audience should come along expecting to have a lot of fun! The cast for this show is incredible and everyone does such an amazing job of inviting the audience to have just as much fun as we are having on stage!

A: The pharaoh is a larger than life brat. He is incredibly over the top and is used to getting things his way so when he begins having dreams that he doesn’t understand and needs Joseph’s help he still manages to make it appear as his idea. He doesn’t show up as much as some of the others but he’s certainly a character you’ll remember!

A: I’ve been acting off and on for about 20 years. It all started from showing an interest in learning tap dancing as a young 8 year old in country Queensland. Form there I went to cruise ships in the U.K and now to Community Theatre in Sydney.

Q: What kind of audience is this show tailored towards?

A: The show really is for everyone. The story is quirky and fun and as the title suggests – COLOURFUL!

Find out more and book your tickets now at www.pioneertheatre.com.au.