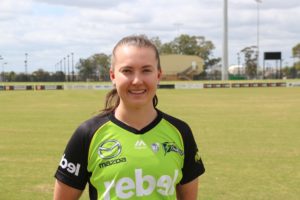 At only sixteen years old, Rachel Trenaman is already making a splash in the world of cricket.

Having recently signed a two year contract with Sydney Thunder, she is well and truly an up and coming star with a stellar cricket career ahead of her.

Q: What can fans expect from the upcoming Sydney Thunder fan day?

A: This Sunday, Sydney thunder fans can expect to meet and talk to some of their cricketing heroes. They’ll have the opportunity to participate in some fun activities and ultimately get some signatures from players from both the men’s team and women’s.

Q: Can you give us an overview of how you’ve gotten to this point in your cricket career?

A: My cricket journey like many others started in the backyard from a very young age. I started playing competitively at the age of 8 in the local school comp with all the boys. I then continued through the ranks and played junior and currently senior men’s cricket in Wagga. I first came across female cricket at the age of 11 when I played in the Riverina PSSA side in year 5. In the same year I trained all winter with the Riverina Cricket NSW academy. I’ve since been in the CNSW pathway playing with the state team at U15 and U18 carnivals. This is my first year of being both state contracted and WBBL contracted.

Q: What is your biggest cricketing achievement to date?

A: My biggest achievement to date would be being selected in the Shooting Stars to tour Sri Lanka earlier this year.

Q: What sparked your love of cricket?

A: I’m not really sure… maybe because I got to play it with friends. I love the social aspect.

Q: How have you found being a female player in a very male dominated industry?

A: I haven’t found it challenging in the slightest. I have entered the professional level of the game in a time where female athletes aren’t entirely behind the eight ball anymore. It’s hard to make a judgement on the change in environment considering it’s my first year being contracted but I do know that it doesn’t feel like such a male dominated industry with the women getting TV coverage and better salaries. The gap is closing.

Q: What’s the next step in your cricket career?

A: I’m not really eyeing off a ‘next step’ but rather just want to keep developing my skills and see where that takes me.

Catch Sydney Thunder at their fan day this Sunday, December 17 at Bruce Purser Reserve from 9am.

For more info and other exciting events on in The Hills this summer, check out www.summerseries.com.au.