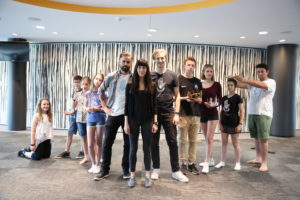 The bubbly entertainer has temporarily switched from gracing the stage as an actor to writer and director for Sport for Jove’s Second Age Project.

This is what she had to say about her new role and the young actors following in her footsteps.

How did your involvement with the Second and Third Age Projects come about?

I’ve been an active working member of Sport for Jove for a number of years.

I first did a double season with them a few years ago. I actually started with a triple bill performance, which was the Twelfth Night, The Comedy of Errors and The Tempest.

Since then, I’ve done a number of other shows with the company. I did last summer season and I’ve done a few of the winter shows.

I’ve been with the company for a while and we’ve formed quite the family. As a result of this close network and my Sport for Jove colleagues taking on the director role previously, I was asked if I would like to be involved this year and I was very happy to be.

What do you enjoy about your role as director?

I love watching young people bring themselves into the rehearsal room with so much energy, creativity and inspiration. They are wonderful to work with.

It’s incredible watching them grow throughout the process.

I love working with Scott (Sheridan). We work very well. The room we run is very fluid and the young people seem to be getting a lot out of it.

Is acting and directing very different from one another?

As a director, your eye needs to be on the entire production. You have to weave the thread of the story from beginning to end. You need to have sense of the whole story and what each little element brings to that story.

As an actor, you absolutely have to be aware of your part in the whole story. You need to understand the whole story, but your primary responsibility is your specific role and what you are contributing to that story. So, you really need to focus on your part and commit to that. You need to give your all as a support to the other people that you are on stage with and a support to the director’s vision.

Actors bring a lot to roles that directors cast people to begin with and directors will offer things to actors that they might not have thought to bring in. It’s constantly a blurred line to who has brought what to the role.  It’s very collaborative.

Do you think your role as director will help you evolve as an actor?

Absolutely, I think it will. I am looking forward to developing as a director as I move into the future as well.

What’s been a memorable moment in your career to date?

I also did a show with Belvoir Street Theatre a few years ago which was called Ruben Guthrie and about 10-15 years ago I did another play called Closer, which is particularly memorable to me.

I have had a number of roles which have been really close to my heart.

Why should people come and watch the Second and Third Age project?

I think people should come and watch the Second and Third Age Projects because they will be highly entertaining.

It’s wonderful to see these young people get up on stage, express themselves and tackle the language the way they do.

I think we will warm the audience up with a bit of laughter, then we will hit them with a big tragedy with the Third Agers. They are very different projects. So, they will really get a really diverse experience watching both the shows.