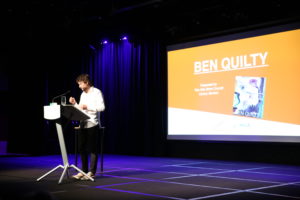 Ben Quilty believes there are two things budding artists need to do to be great – and that’s to continuously work on their craft, and to have a sacred and private place to produce their work.

“I look back at my works in Year 10 and Year 11 and it started then,” the Archibald Prize winning painter told audience members at the Pioneer Theatre in Castle Hill recently.

“The best thing my art teacher did was to have beautiful pot plants in her room.”

“We would sit around the beautiful pot plants and everyone would talk. They were like-minded people and we learnt to draw and paint that thing over and over again. They were my first works,” the Oakhill College graduate confessed, before adding: “really the key in my opinion to visual arts practice is repetitive drawing and a good art room.”

The usually reserved artist returned home to NSW to discuss his newly released self-titled book, Ben Quilty, days after showcasing his works at the Art Gallery of South Australia – a tremendous feat for Quilty or any artist for that matter trying to secure a solo exhibition in a renowned gallery.

During the hour-long talk at the renewed local theatre, the 46-year-old spoke of his time living in The Hills, his time at Oakhill College, his journey to Afghanistan and his time mentoring Bali Nine member, Myuran Sukumaran.

He also spoke of his love of creating art privately in his bedroom and emphasised the need for artists, particularly art students, to have a designated art room so that they can create their works free from others “staring over their shoulders”.

“Art rooms need to be arts rooms,” he said. “You can’t share the art room with others.”

“I go to schools and they ask me to speak and then they have to clear it out and have economics in it [afterwards]. It seriously has to have the sacred private truth of an art room,” he told audiences, adding: “I say the Art Gallery of NSW is my church and an art room back there is somewhere to pray.” 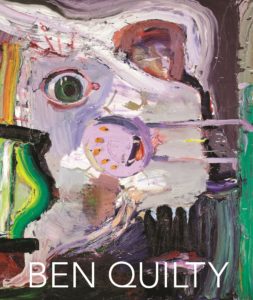 Quilty also made a number of suggestions to Pioneer Theatre-goers – which consisted predominantly of teachers, Year 12 students and emerging artists – on how to find work in the tough and demanding art industry.

He also explained the importance of experiences and how it can inspire future work.

“When I was at high school I had no idea of any other [art] job…which is madness,” he said.

“There are other ways and other things to do, but it is really about going and experiencing the world.”

“I travelled half way through the second year of the Sydney College of the Arts. I was failed. They said ‘if you don’t defer, we will fail you’. I was pretty much off the rails at that point, which makes it hard.”

“I left and went up the east coast of Australia with a mate and I wanted to learn indigenous [an Aboriginal language]. I thought there was just one indigenous language. It not’s my fault, I didn’t know. There was no education on the indigenous community in my entire education.”

“And when I got to Cairns, we met an Aboriginal man and I was a bit hesitant and I didn’t know what to say. He laughed and said ‘you have travelled through 60 language groups’, from Sydney through to Cairns.

“So when I came back, I enrolled at Monash University and learned about Aboriginal culture and history. It was mind-blowing.”

“If you are keen and interested, go into a studio system. Go and help someone. Go to an Aboriginal community … they are crying out for studio assistants out there.”