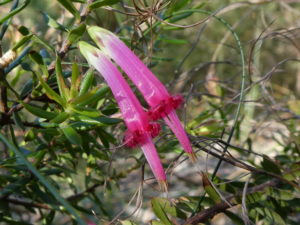 Styphelia: From Greek for dense, referring to the dense habit of some species.

Habitat: Heath and woodland on sandstone.

Fruit: Greenish red berry with distinct ribs, attributing to the name “Five-corner”. Fruit is edible and was eaten in Colonial times.

Fairly common in sheltered understories in The Hills Shire on sandstone.