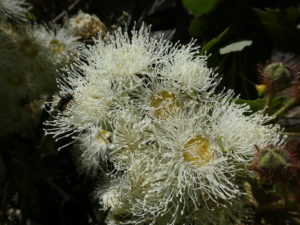 Angophora: From Greek aggos and phero, meaning vessel which refers to the fruit.

hispida: From Latin, meaning rough, from being covered with hairs.

Flowers: Creamy-white, to 3cm with a fragrant, sweet smell like honey. Pollinated by bees, wasps, beetles and flies. Can be propagated from seed.