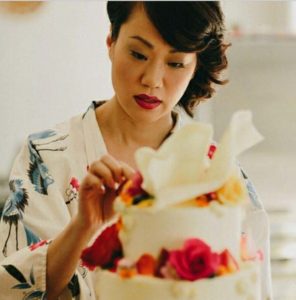 Nikki Lee’s earliest memory of baking is sitting in her highchair, watching her mum decorate her first birthday cake.

“I was the first one in my family to be born in Australia, so my mum made me the koala cake from the Women’s Weekly Cookbook in the 80s,” Nikki said.

And it appears that early memory lead Nikki down the path of pursing a career in baking. In fact, she’s the founder and creator of successful cake making business, Unbirthday.

“Baking cakes has been a little bit of a dream job for me since I was very little and to be able to do that as an adult and then create a business from it has been a bonus,” she said.

She attributes her success to the picture sharing social media platform, Instagram, which has allowed her to share her sweet creations with the world.

“I’d just started taking photographs of the cakes as they were made and I’d just say: ‘Look here’s some of the work we’ve done’. And people would email us and say: ‘I want to order this, I want to order that’.

“It was just a very organically growing process,” Nikki said.

“That’s how it turned from a hobby to a business.

“I think social media is a medium that allows things to happen that probably wouldn’t of happened five or 10 years ago,” she added.

Now Nikki is sharing her secrets to success and social media domination at the next FoundX Meetup at The Hills Shire Council on Thursday, August 16.

“I’m hoping people in the audience can gain an insight or a new perspective on how they can do these kinds of things [using social media] themselves,” she added.

But it’s more than just social media that makes a successful business. Nikki says you need to have a good financial and emotional support network.

“I didn’t put any financial pressure on Unbirthday when it first started because it was a very personal dream and close to my heart,” she said.

“When you start putting dollar figures around that kind of thing, it puts a bit of pressure on it in a way that’s unnatural and forced.”

To hear more sweet secrets from Nikki, see her at The FoundX Meetup on Thursday, August 16.